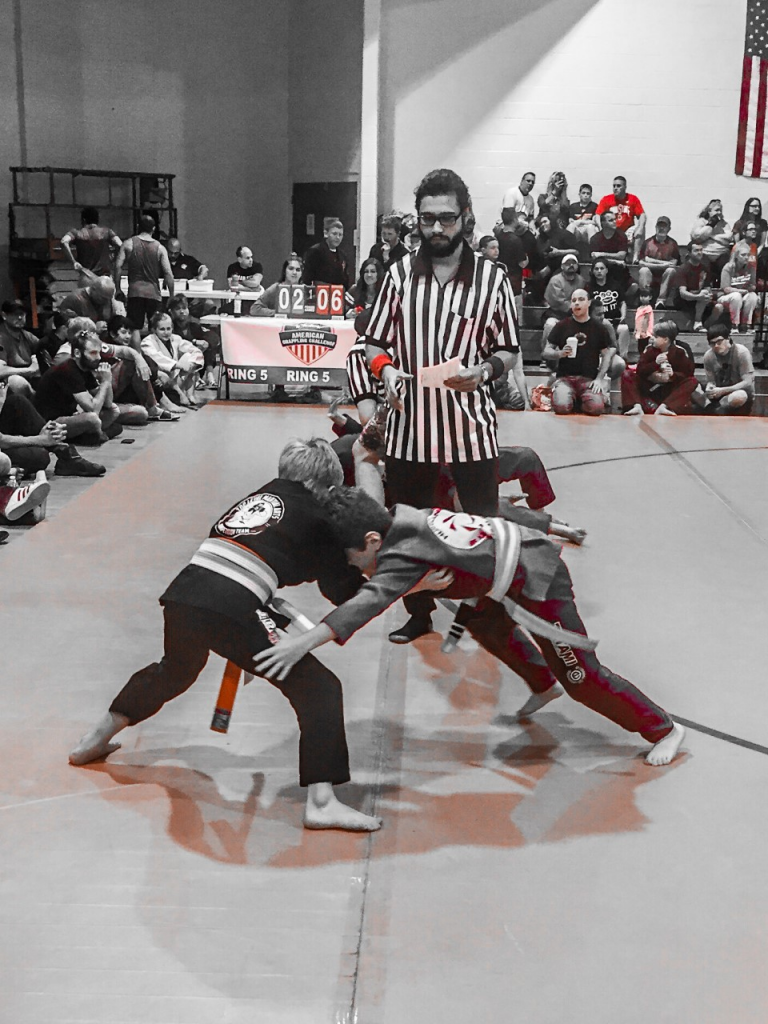 I’ve been assisting with the kids jiu jitsu classes at my academy for about a year now. It’s something that I really enjoy, and has been rewarding for me. It has also been rewarding for my son who is one of the kids in the class. He seems to like it when I’m in there helping the instructors show technique to the other kids. I’m really less of an instructor and more of a glorified grappling dummy for the instructors to demo on, but it’s still a role I really enjoy.

When I first started helping out with the kids jiu jitsu classes I had a lot of questions. I needed to learn the proper balance between helping the kids learn discipline, and making class fun. I’ve taught kids music classes in the past, so I know how important it is to make learning fun. Kids learn best that way, as we all do. But allow them to have too much fun and the whole class can get away from you. Before you know it their energy level skyrockets, and it gets difficult to focus them again.

We do a lot of different activities to help the students maintain their focus. Of course we have them line up at the beginning of class in the usual jiu jitsu fashion, and sometimes we have them sit down in their spots and do a bit of guided breathing exercises before we start to center them. After we bow in, the kids get a nice long warm up. This serves to build up some of their conditioning, as well as giving them a way to get their energy out.

After warm ups we teach the class, give them some sparring time, then play some games near the end to send them out on a positive note. That’s all pretty standard from what I’ve seen at other gyms. But how do we interact with them while teaching so that we can connect and really help them grow in the sport?

I’ve learned a few tricks to help with this connection over the past year. One thing I’ve found really helpful is to simply get down on their level. When I’m walking around helping the kids with their technique, I’ll kneel down, or even sit down next to them while I’m helping. This way we can all look at each other eye to eye. I can imagine it’s a lot easier to listen to somebody when they are not looming above you.

On the reverse end of that if we have kids getting ready for a competition we might pair them up with someone that we know is mature and strong so that they can help the competitor prepare well. These more mature students do a great job of reminding the competitors to keep moving in a roll and giving them a little more intensity than a normal roll.

Of course inevitably conflict will arise. It’s hard to expect kids in jiu jitsu to be so physical with each other in a combative way and never have any arguments arise from that. This too becomes a good opportunity to help them learn to control themselves. A recent scenario comes to mind. We had one student getting controlled really well by another, and instead of tapping he kept fighting through a choke, but I could see tears welling up in his eyes. I stopped the match and asked him why he was crying. He said that the choke wasn’t working but it was hurting his jaw. I could tell he was angry with his partner too. I simply talked him through the idea that he could tap at any time, for any reason, and the round could start all over again. That seemed to calm him down a little. They started the roll again and things went a bit smoother after that.

I also think an important aspect of teaching kids jiu jitsu is communicating well with their parents. We’re lucky at our school, all of the parents that bring their kids there to learn are very friendly and are also interesting people to talk to. I’ve actually made quite a few friends of the parents of the kids we work with. I think it’s good for them to know they can talk with the instructors, and that as parents they are an important part of the community of the school.

The last and probably most important thing I’ve learned in the past year is to always treat the students, parents and other instructors with respect. To be a good role model for the students you have to exhibit the behavior that you hope they will emulate. It’s good to take a little time before class to center yourself and be ready to be the best person you can for everybody in the school. Everyone is there to learn and have fun, so I make a real effort to shake off any stress from my day job before walking into the academy, and I be sure to have a smile for everyone that I talk to and work with.

I’m certain there’s much more to learn, I’m relatively new to jiu jitsu (in the grand scheme of things), and even newer to teaching kids jiu jitsu. I didn’t even touch on the way to teach technique in this post. It’s important to get the relationships right in addition to getting the techniques taught well, maybe even more important when teaching kids. I believe that if you build good relationships with the students and their parents then it will create a fertile ground to help the kids learn jiu jitsu and build a life-long love of the sport.