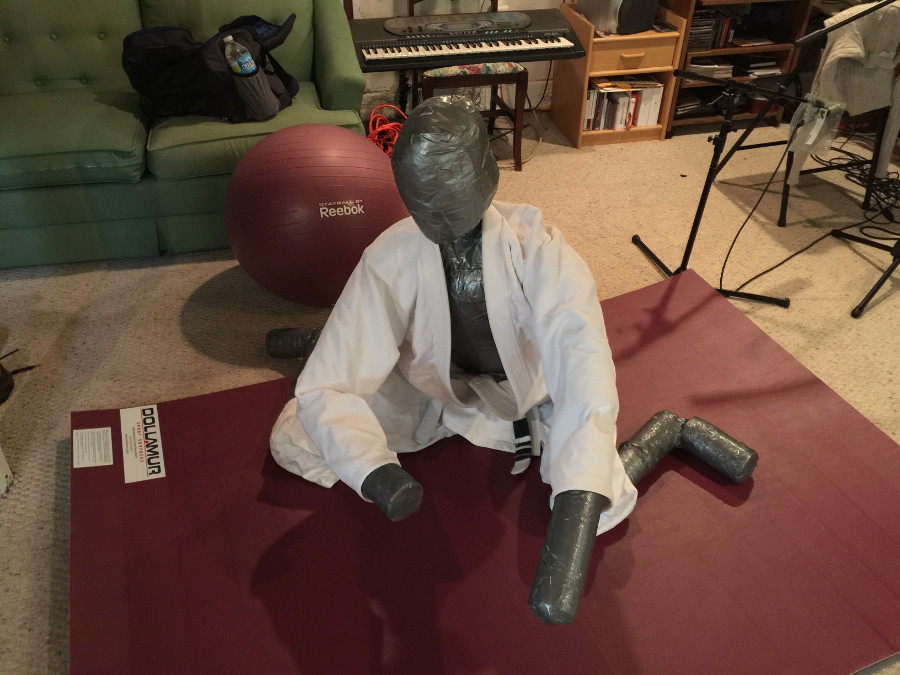 This is my take on making a homemade grappling dummy. My goal was to create something durable, flexible, and strong, and to try to do it as cheaply as possible. I tried to do this under 50 dollars, but I ended up spending about 80 dollars. This design took a lot of duct tape, which was about half the cost. If you can get *good* duct tape cheaper than I did (about 10 dollars a roll), then you might be able to get the cost down. Regardless, I still saved a ton over buying one outright.

I started the design based on this link on various tutorials I’ve seen online. I combined a couple of ideas and built what I have listed below. I wanted to put together a detailed tutorial on how to build one, because I didn’t see a really well spelled out tutorial online already.

I’ve had some time to practice with this dummy. So far it seems pretty sturdy. I will update this page if there end up being any issues with it. Since this design uses the service cable, the flexibility allows you to position this dummy in a variety of ways, and the strength of the service cable allows the dummy to hold it’s position on it’s own. It can sit in upright in your guard, or wrap you in guard, etc.

STEPS TO BUILD YOUR GRAPPLING DUMMY

The great thing about this design is that the service cable is strong enough to stand up to abuse, while flexible enough that you can bend the dummy into positions that you need in order to practice your moves. The pool noodles are a cheap and easy way to add bulk to the arms and legs as well. Down the road I may add a little more build to the thighs of the legs but for now it seems to be working out ok. I’m able to practice triangles, armbars, omoplatas, and even some take downs with this design. If I think of any improvements I’ll be sure to post them. If you think of and want to share them you can comment below.

Check out the video at https://www.youtube.com/watch?v=X0kyNUEMZbo for more details.

5 thoughts on “How to Build a Grappling Dummy”