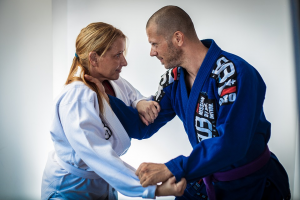 The term “Boyd Belts” in BJJ refers to a philosophy of training that Rener Gracie came up with in regards to rolling with people of different ages and weight classes. After having a conversation with black belt John Boyd, Rener realized that he had to come up with a way to describe what it’s like to roll with people of different ages and weight. Boyd had been having trouble grappling with a blue belt that was 20 years younger, and 60 pounds heavier than him. Boyd, feeling like he should have been able to submit the blue belt,spoke to Rener about it, and Rener came up with this concept that he later coined the “Boyd Belts”

Who was John Boyd? Boyd was a jiu jitsu practitioner and teacher at the Gracie Academy in California. He studied under Rorion Gracie (check out Rorion’s book on the Gracie Diet), and received his black belt 11 years after he began. Boyd started training in his 40’s, and when Helio Gracie saw Boyd training he was impressed to see someone of his age on the mats. Helio offered to teach him a private lesson which Boyd videotaped and you can see below:

Being an older practitioner can have it’s challenges in a sport in which so many young and athletic people participate. John Boyd being on the mats with these younger athletes led to this analysis of what it’s really like to train as an older, smaller jiu jitsu player. Boyd passed away some years ago, but his legacy lives on through this concept of the “Boyd Belt” system.

So what exactly are the “Boyd Belts” in jiu jitsu?

It’s essentially this idea: For every 20 pounds someone has over you, they can be considered to be one belt higher. For example, if you are a 160 pound blue belt and grapple with a 200 pound blue belt, the weight advantage they will have over you would be similar to them having a brown belt over you.

Additionally, for every 10 years younger a person is than you, that can also signify another belt level over you. So if you are a 45 year old blue belt, and grapple with a 25 year old blue belt, than that person can be considered to be similarly challenging to you as a brown belt your same age and weight would be.

Of course how strong someone is plays into this as well. One example Rener mentions is the Rickson/Zulu fight, where Zulu was extremely strong and aggressive, and because of this it took Rickson more than 10 minutes to submit him, though Zulu had no jiu jitsu experience.

So this begs the question “I thought jiu jitsu was supposed to work regardless of size/age?”. And Rener’s point is that this is exactly WHY we train jiu jitsu… to neutralize the Boyd Belts.

It may be harder, and take longer to submit someone bigger, younger, faster and more athletic than you, but training jiu jitsu is the best way to develop the skills necessary to handle these encounters. A proper understanding of the Boyd Belts will help you when you’re feeling frustrated rolling with these stronger, less experienced athletes. Hopefully you can feel more confident in the knowledge that your jiu jitsu can help you weather the storm when it comes.

Check out this video from Rener and Ryron Gracie as they describe the Boyd Belts and other factors that will help you to continue rolling throughout all the seasons of your life:

One thought on “What are Jiu Jitsu “Boyd Belts”?”